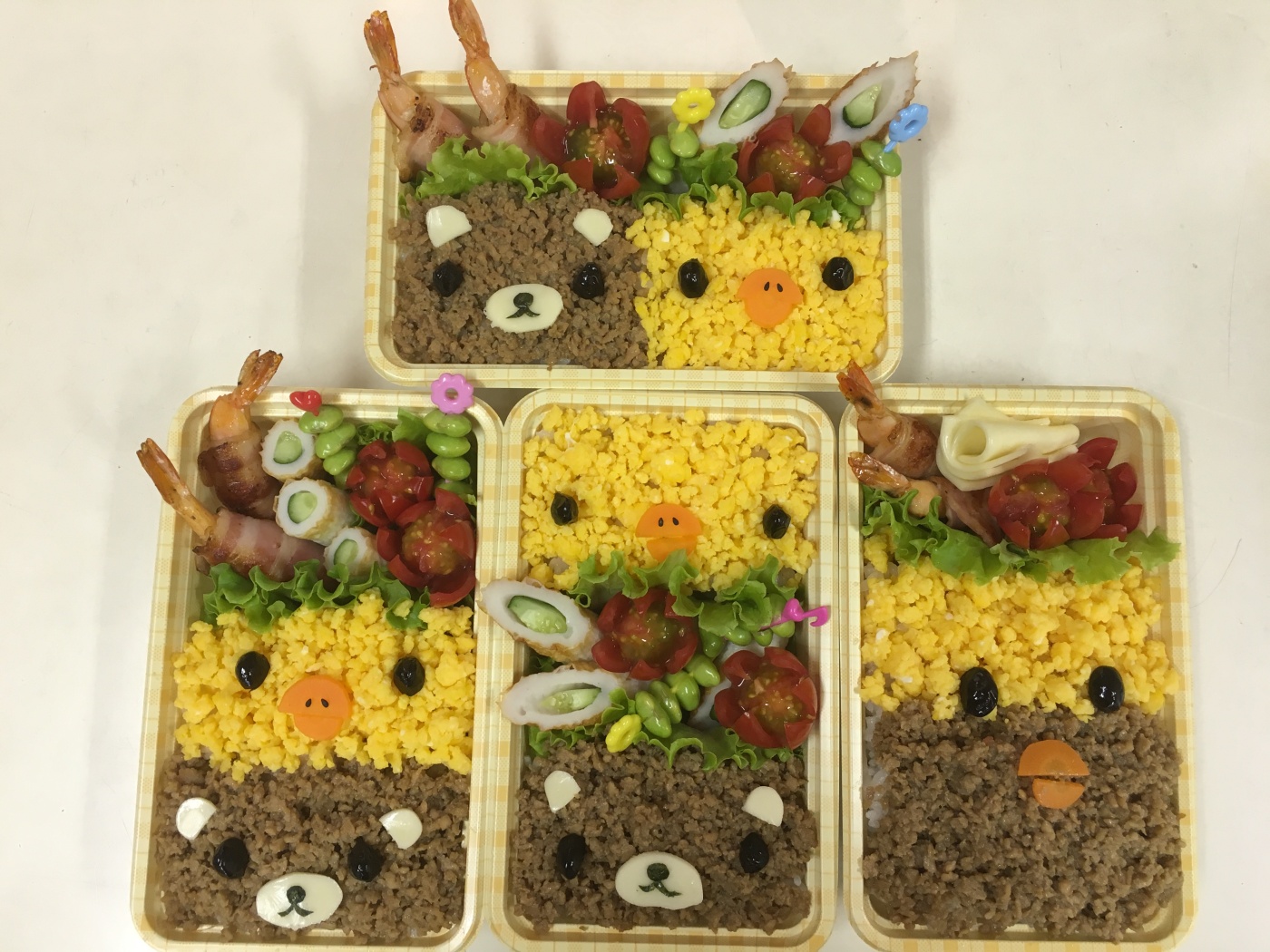 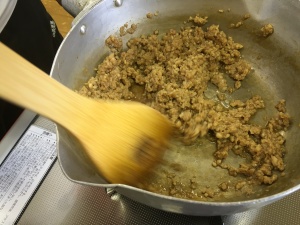 1. Fry the ground chicken breast, together with the sugar, soy sauce, sake, and grated ginger, on medium heat. Use a wooden spatula to stir the contents of the pan to produce a crumbly texture. Continue cooking until half of the liquid is evaporated. 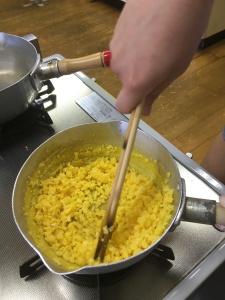 How to Make
1. Crack the eggs into a mixing bowl, add the sugar and salt, and mix well. Place a frying pan on medium heat, pour in the egg mixture. Use four cooking chopsticks held together to stir the egg mixture around. The goal is to produce a crumbly texture in the end. When the eggs are about half done, reduce to low heat and continue cooking/stirring until the eggs are fully cooked.

How to Make
1. Cut the nori to form the bear nose, as shown in the photo.
2. Leaving the plastic wrapper on the sliced cheese, use a bamboo skewer to trace two round pieces about the size of a shirt button and one round piece about the size of a one-yen coin. Remove the plastic wrap and then use the bamboo skewer to cut the three round pieces out of the cheese.
3. Cut a carrot round to form the chicken’s beak, as shown in the photo. Rinse the leaf lettuce, remove the excess water and shred into large pieces. 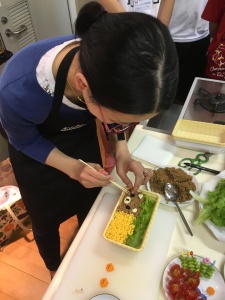 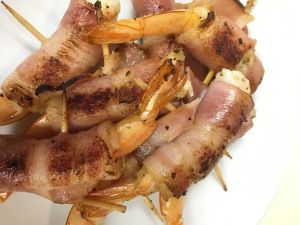 How to Make
1. Leaving the tales on the shrimp, make a shallow cut along the back of each shrimp and remove the vein, which should look like a dark thread. Rinse the shrimp in water and dry them with a paper towel. Add salt and pepper to taste.
2. Cut the bacon strips in half. Wrap each shrimp with a half of a bacon strip and stick a toothpick through the wrapped shrimp to secure the bacon.
3. At a small amount of olive oil to a frying pan and place the frying pan on medium heat. Cook the bacon-wrapped shrimp until they are browned on both sides, then remove them to a plate to cool. Once they have cooled enough to handle, remove the toothpicks.
Kyūri Chikuwa 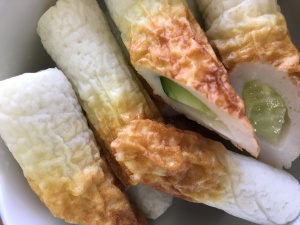 How to Make
1. Cut the cucumber to get a stick that is small enough to fit snugly into the chikuwa hole. Cut the chikuwa into whatever lengths you like. 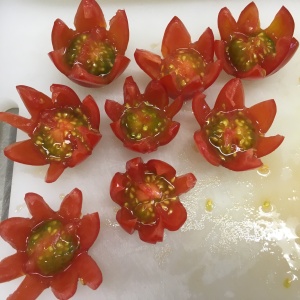 1. Remove the stems from the tomatoes. On each tomato, make six shallow cuts radiating out from the center of the bottom of the tomato and then gently pull the separated sections out to form flower petals.
Salted Edamame
Edamame (枝豆 / Edamame) 100 g
Salt (塩/ Shio) 2 tbsp
Decorative food picks (かわいいピック / Kawaīh pikku) 8 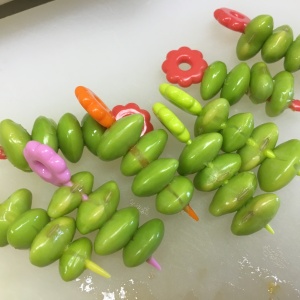 1. Rub salt onto the raw edamame. Place the salted edamame, and any remaining salt, into a generous amount of boiling water. This will cause the water to stop boiling. Let the water come to a boil again. Leave the edamame in the boiling water for another 1-2 minutes, then remove them and let them cool.
2. Once the edamame are cool enough to handle, remove the beans from the husks and skewer them on the decorative food picks.

Kitchen Nippon held a Rilakkuma kyaraben class for students at a Japanese-language school. Chef Tateno’s recipe and kyaraben design required a fair amount of detailed cutting of parts for faces and other elements, but the participants, from China, Indonesia, Russia, and Taiwan, followed directions closely and reproduced the recipe beautifully, adding their own touches along the way. Thanks to Chef Tateno and all the cheerful participants, this class was great fun for everyone involved!

After a career as a radio DJ in Tokyo at JOLF, a television reporter at Nihon TV, and a foreign correspondent for the Japanese television broadcaster Fuji TV in New York, I now teach at junior colleges and emcee public and private events. My interest in food is wide-ranging. I bake bread and have published a book on salads. Contact:kitchennippon@hotmail.com